How to perform time series decomposition

Time series decomposition lets you separate the trend and seasonality in your data so you can see what's happening beneath. Here's how it's done. 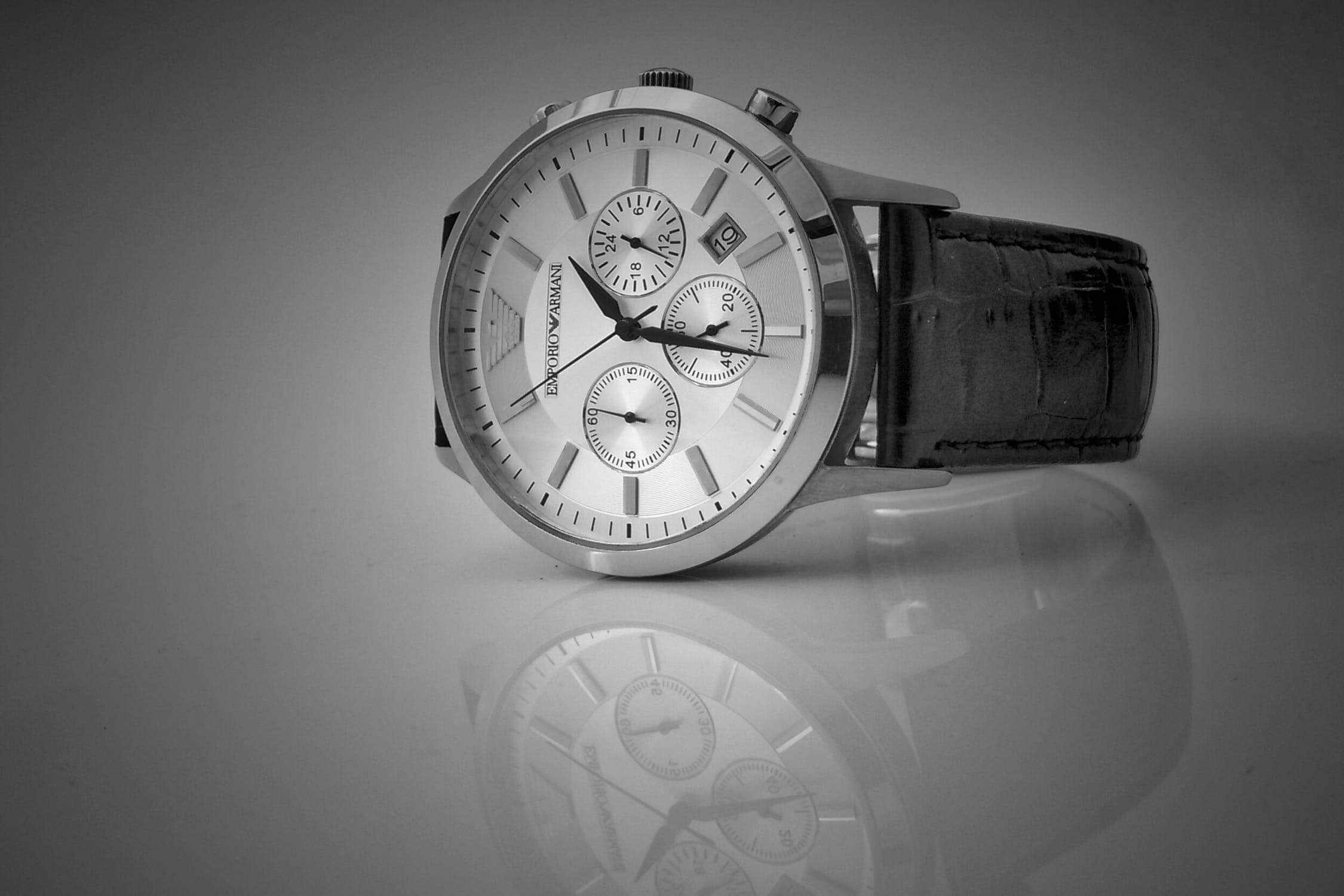 Time series data have a reputation for being somewhat complicated, partly because they’re made up of a number of different components that work together. At the most basic level these consist of the trend - indicating whether a time series metric is going up or down over time - and the seasonality, which can be yearly, monthly, or daily.

Most time series forecasting models use a technique called time series decomposition to split out these components from the time series, so they can separate the trend and seasonality to identify noise and other changes in the underlying metric being forecast. Ordinarily, this can be quite a complex procedure, but it’s fairly straightforward in the Prophet model.

We’ll be using three packages for this project: Pandas for displaying and manipulating our data, GAPandas for fetching Google Analytics data using the Reporting API, and the Prophet forecasting model for time series decomposition. Any packages you don’t have can be installed by entering pip3 install package-name.

If you already have a time series dataset you can skip this step. If you want to personal time series decomposition on data from a Google Analytics account you’ll need to set up GAPandas. This is explained in more detail in this guide, but you’ll require your JSON keyfile and the view ID for the account you want to access.

Next, we’ll create a simple API query payload and pass it to Google Analytics using GAPandas. This will return a time series dataframe in which your chosen metric is shown alongside the date. Google Analytics will automatically fill in any blanks with zeros. I’m examining some web analytics data for one of my personal sites.

The Prophet model requires a dataframe containing two columns: a datetime column called ds and a field containing your metric called y. Use the Pandas rename() function to rename the columns and ensure the date column is set to datetime using the to_datetime() function.

Next, we’ll configure Prophet to use daily_seasonality, because the traffic on the site I’ve used varies according to the day of the week. Then, we’ll fit the model to our df dataframe containing the ds and y columns.

In order to give Prophet somewhere to store its predictions for our forecast, we need to extend the dataframe of dates to include those in the future period we want to predict. I’ve done this using the make_future_dataframe() function which I have set to the next 365 days.

Now we can get the Prophet model to predict y for the next 365 days using the predict() function. By examining the fields in the forecast dataframe, we can see that we get a yhat holding our predicted value, plus a yhat_lower and a yhat_upper, representing the confidence interval on either side.

Next we can plot it on a time series plot using Prophet’s plot() function. The dark blue line represents the prediction from yhat and the pale blue lines represent the yhat_upper and yhat_lower. The black dots represent the actual data.

On my data set there are some outliers, caused by site issues and sudden traffic spikes, as well as a level shift anomaly caused by traffic increasing and then dropping as a result of the pandemic. The period after 2021 represents our future period, so there are no black dots here. 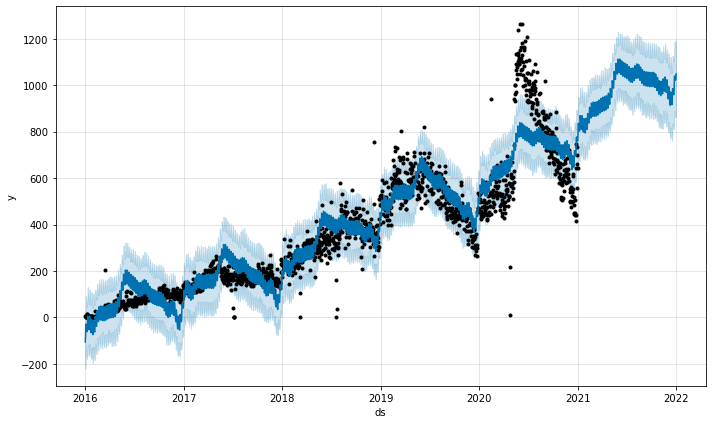 Prophet actually makes this really easy and it can be generated simply by calling the plot_components() function and passing it the dataframe containing our dataframe from forecast. This generates four separate plots which have been extracted from the time series. 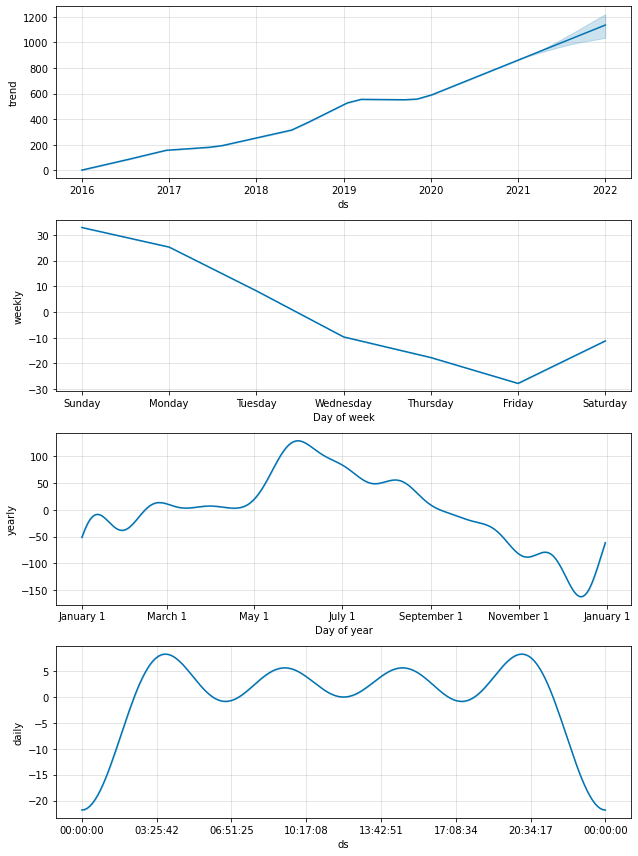 Working with Dates and Times in Python

Learn how to work with dates and times in Python . 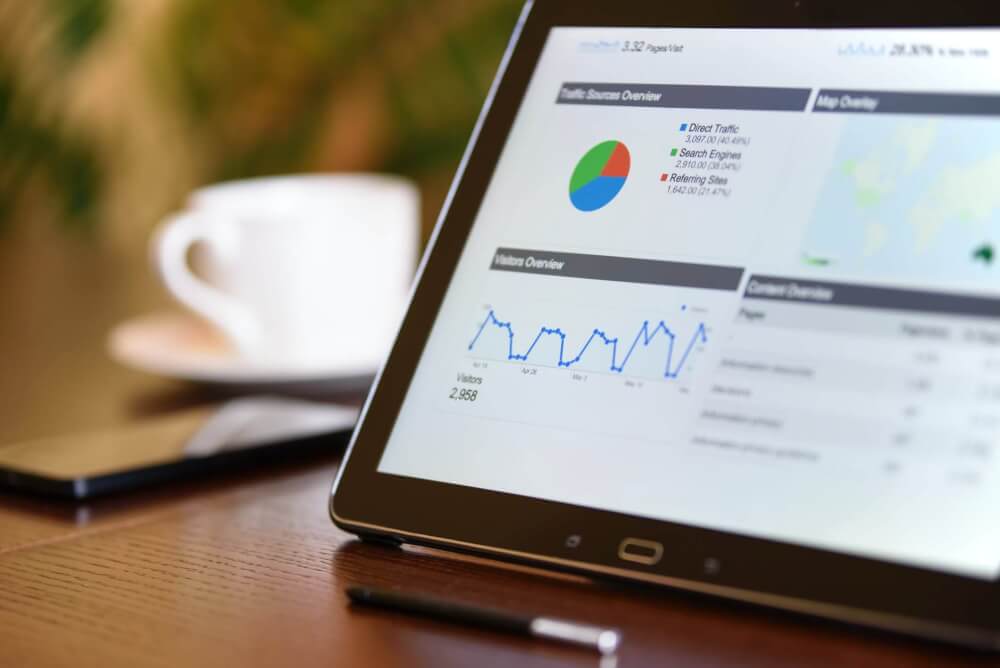